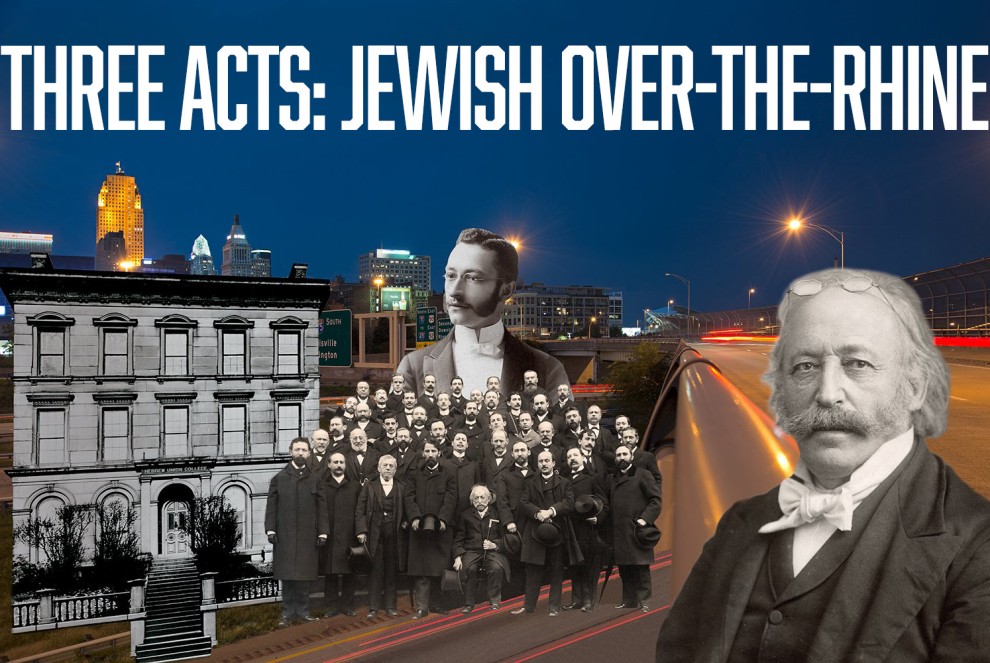 Join the Over-the-Rhine Museum for another “Three Acts in Over-the-Rhine” program on Wednesday, December 14th at Memorial Hall (1225 Elm Street). As Jewish Cincinnati’s bicentennial year comes to a close, this program features three talks about the roles and impacts of Jewish residents in Over-the-Rhine and the West End. Short presentations will be made by: Carrie Rhodus, Operations Manager of Jewish Cemeteries of Greater Cincinnati; Anne Delano Steinert, Research Assistant Professor in the Department of History at the University of Cincinnati; and J. Miles Wolf, a photographic artist with work focused on Jewish Cincinnati. Event check-in will start at 6:00 pm and the program will begin at 6:30 pm.

Tickets can be purchased on a “pay what you would like” donation basis. We recommend $5-10 per person. A cash bar will be available throughout the event. Reserve your seat today at www.otrmuseum.org/events/jewish-over-the-rhine.

This Three Acts event will be held in Memorial Hall’s lower-level studio room which has its own entrance along the north side of the building off of Elm Street. Paid parking is available just across the street below Washington Park. Bus and streetcar stops are also conveniently located directly across from Memorial Hall, in addition to a Red Bike station at Elm and 14th streets. This program will also be available to watch live via facebook.com/OTRmuseum. Please join us in celebrating these stories of Over-the-Rhine!

Carrie Rhodus is the Operations Manager of Jewish Cemeteries of Greater Cincinnati. A Cincinnati native, Carrie holds a Master's in Historic Preservation from Ball State University. She has previously worked as a teacher, draftsperson, realtor, and historic preservation specialist for private and public entities across the city.

Carrie's talk will focus on the lives of the Kabakoff family, as told through the lens of cemeterian research methods. This talk will touch on Russian Jewish Immigration to Cincinnati, Cincinnati Jewish social services, congregational life, and Jewish death rituals.

Anne Delano Steinert is the founding board chair of the Over-the-Rhine Museum and a Research Assistant Professor in the Department of History at the University of Cincinnati. She also directs the Center for the City at UC which connects the Department of History with the School of Planning where she teaches courses in historic preservation and oversees the bachelors program in Urban Studies.

Anne's talk will use one German Jewish Cincinnatian, Joel H. Steinberg, to explore the assimilation of German Jews into Cincinnati's secular and social worlds. Born in Kuhrhessen, Prussia in 1830 and immigrating first to Indiana, Joel Steinberg arrived in Cincinnati in the late 1860s. Mr. Steinberg, worked as a grocer and served in leadership roles in his synagogue, the Cincinnati Turners, several singing societies, and local political organizations. This talk will dig into the work, social, political, and personal life of Joel Steinberg as a model of the German Jewish immigrant experience.

J. Miles Wolf is a photographic artist living and working in Cincinnati. He started his photographic studies at Tulane University, and after several years of exhibiting his work at art shows he opened local galleries and photo labs. Miles’ work has been visible around the Cincinnati area for over 40 years. Miles’ photographs are in the permanent collections of the Smithsonian’s National Museum of American History and the Cincinnati Art Museum. Locally his photographs are in hundreds of corporate and private collections. Over the past six months, Miles has had 3 major exhibits of his work: Art Deco Architecture of Cincinnati at the Annex Galley; Hometown Heroes, a downtown public exhibit with 3CDC; and Jewish Cincinnati: A Photographic Record by J. Miles Wolf at the Skirball Museum, open through the end of January.

For his presentation, Miles will share images and information about some of the early Jewish congregations previously located in Over-the-Rhine and the West End, and show how he incorporated those into new, historic collages. Miles will also delve into a few stories about his great-great grandparents who lived in the West End in the 1880’s when it was a vibrant Jewish neighborhood.

Three Acts in Over-the-Rhine is an innovative lecture series designed to expose attendees to stories of the Over-the-Rhine neighborhood. Each event features three, fifteen-minute talks on the history of Over-the-Rhine. Presenters will answer questions together at the end about their talks.
___________________

The Over-the-Rhine Museum inspires understanding and respect for the people who have created and lived in Cincinnati’s historic Over-the-Rhine neighborhood by working with community members to uncover, present, and preserve their stories.