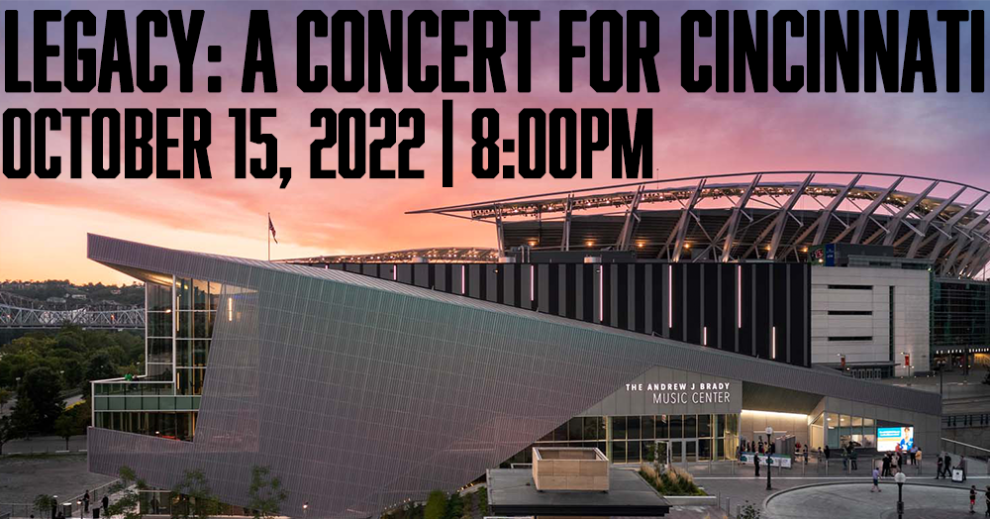 The year long celebration of the Jewish Cincinnati Bicentennial will culminate with an exuberant three band concert on Saturday, October 15 at the Andrew J Brady Music Center.

Co-headliners Walk the Moon and Trombone Shorty & Orleans Avenue will be joined by special guest Lawrence for “Legacy: A Concert for Cincinnati.” Tickets are on sale now, with general admission starting at just $20 per person, exlcuding fees and taxes.

The concert was planned to coincide not only with the close of the Bicentennial year, but also with BLINK 2022, the nation's largest light, art, and projection mapping experience, taking place October 13 - 16 in Cincinnati.

“Our objectives for this Bicentennial have always been to INSPIRE, ELEVATE, and CONNECT,” said co-chair Kim Heiman. “Through the Jewish Federation of Cincinnati, the Jewish Foundation of Cincinnati, and with help from numerous sponsors and partners, we have helped create more than 50 events, exhibitions, and experiences since September of 2021. More than 25,000 people have commemorated this milestone with us. We like to say that this concert is one night, 200 years in the making!”

“We have highlighted the contributions of the Jewish community over the last 200 years through a variety of exhibits, performances, and events,” continued Jewish Federation of Cincinnati CEO Danielle Minson, “and like so many in this city, we started out as immigrants. But we found common ground with our fellow Cincinnatians in every facet of life, enriching one another’s culture and ensuring connections that bind us today and give us reason to celebrate, along with hope for another 200 years of growing stronger together. What better way to mark such a tremendous anniversary, than by dancing and singing along with these outstanding artists during one of the most exciting weekends of the year? We can’t wait for everyone to share this night with us.”

ABOUT WALK THE MOON

Hailing from Cincinnati, OH, WALK THE MOON consists of Nicholas Petricca (singer/keyboardist/bass), Eli Maiman (guitarist), and Sean Waugaman (drummer). In 2015, the band catapulted to stardom when their hit single “Shut Up and Dance”, which is included on their RIAA Certified Gold album TALKING IS HARD, became a multi-platinum global smash that peaked at No. 1 on the Alternative, Hot AC, AC charts, No. 4 on the Billboard Hot 100, and went to No. 2 at Top 40 radio. Throughout their career, the band has had a slew of honors including winning two Billboard Music Awards, a nomination for an MTV Music Video Award for Best Rock Video, American Music Award nominations for Favorite Pop/Rock Duo Or Group, New Artist of the Year, and Favorite Alternative Rock Artist.

GRAMMY-nominated NOLA icon TROMBONE SHORTY has, since 2010, released four chart topping studio albums; toured with everyone from Jeff Beck to the Red Hot Chili Peppers; collaborated across genres with Pharrell, Bruno Mars, Mark Ronson, Foo Fighters, ZHU, Zac Brown, Normani, Ringo Starr, and countless more; played Coachella, Bonnaroo, Lollapalooza, Newport Folk, Newport Jazz, and nearly every other major festival; performed four times at the GRAMMY Awards, five times at the White House, on dozens of TV shows, and at the star-studded Sesame Street Gala, where he was honored with his own Muppet; launched the Trombone Shorty Foundation to support youth music education; and received the prestigious Caldecott Honor for his first children’s book.

As NPR writes, “siblings Clyde and Gracie Lawrence are not your typical pair.” Clyde Lawrence and Gracie Lawrence have been writing songs and listening to countless Stevie Wonder, Randy Newman, and Aretha Franklin records in their family’s New York City apartment since they were little kids. After years of playing together, they officially created Lawrence, an eight-piece soul-pop band comprised of musician friends from childhood and college. The band has since gained a devoted following for its high-energy, keyboard-driven sound, which features tight, energetic horns and explosive lead vocals. The tracks on their latest album, Hotel TV, have garnered tens of millions of streams across all platforms and have had multiple viral moments on Tik Tok and Instagram.